Final Fantasy XI:
Final Fantasy XI,[a] also known as Final Fantasy XI Online, is a massively multiplayer online role-playing game (MMORPG), originally developed and published by Squaresoft and then published by Square Enix as the eleventh main installment of the Final Fantasy series. Designed and produced by Hiromichi Tanaka, it was released in Japan on May 16, 2002, for PlayStation 2 and Microsoft Windows-based personal computers in November of that year. The game was the first MMORPG to offer cross-platform play between PlayStation 2 and personal computer.[1] It was also the Xbox 360's first MMORPG.[2] All versions of the game require a monthly subscription to play.[3]
(source: https://en.wikipedia.org/wiki/Final_Fantasy_XI)

World of Warcraft:
World of Warcraft (WoW) is a massively multiplayer online role-playing game (MMORPG) released in 2004 by Blizzard Entertainment. Set in the Warcraft fantasy universe, World of Warcraft takes place within the world of Azeroth, approximately four years after the events of the previous game in the series, Warcraft III: The Frozen Throne.[3] The game was announced in 2001, and was released for the 10th anniversary of the Warcraft franchise on November 23, 2004. Since launch, World of Warcraft has had eight major expansion packs: The Burning Crusade (2007), Wrath of the Lich King (2008), Cataclysm (2010), Mists of Pandaria (2012), Warlords of Draenor (2014), Legion (2016), Battle for Azeroth (2018), and Shadowlands (2020), with a ninth, Dragonflight, currently in development.
(source: https://en.wikipedia.org/wiki/World_of_Warcraft)

Final Fantasy XIV:
Final Fantasy XIV[b] is a massively multiplayer online role-playing game (MMORPG) developed and published by Square Enix. Directed and produced by Naoki Yoshida, it was released worldwide for Windows and PlayStation 3 in August 2013, as a replacement for the failed 2010 version of the game, with support for PlayStation 4, PlayStation 5, and macOS releasing later. Final Fantasy XIV takes place in the fictional land of Eorzea, five years after the events of the original 2010 release. At the conclusion of the original game, the primal dragon Bahamut escapes from its lunar prison to initiate the Seventh Umbral Calamity, an apocalyptic event which destroys much of Eorzea. Through the gods' blessing, the player character escapes the devastation by time traveling five years into the future. As Eorzea recovers and rebuilds, the player must deal with the impending threat of invasion by the Garlean Empire from the north.
(source: https://en.wikipedia.org/wiki/Final_Fantasy_XIV) 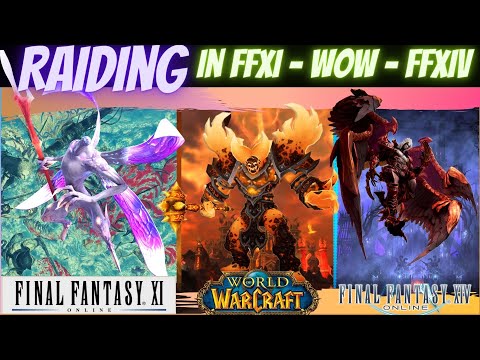 Hey everyone, so in this video I look at what it was like to raid in Final Fantasy XI, go to WoW and experience the raiding there, and than what it wa...