投稿 4 月次 前 by admin
9 再生
Disclaimer: This was a discussion we had on twitch that I thought may belong here. It opion + speculation and is not exhaustive or scripted. please comment below, I would personally really like this to be something I learn more about.

Spanish is the 2nd largest Language in the world, Portuguese is the 5th. While we have Speakers of both of those enjoying the game bc of its existing language support similar to many other languages world wide, I was asked on twitch why they don't have a DC and this was my initial response. It is not exhaustive and is wildly speculative and my opinion but I have been asked this question several times over the last several years, especially when we talk about OCE, Server Expansion, or Fanfests/IRL community events that often have not served this region as well as the regions that do have their own DC. I am an American who has the privilege of playing on American servers so I'm quite aware of my bias and not really sure how to remove it on this subject beyond having a conversation with people who are affected by this to better understand their views. Please please comment below if you are reading this and can't help me better understand FFXIV in regions not all that far from me, relative to much of the world... that many of whom speak a language quite common in my part of the US. 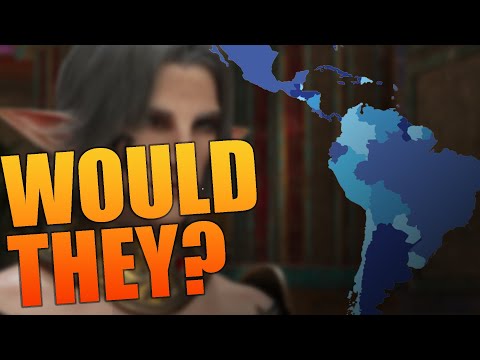 Disclaimer: This was a discussion we had on twitch that I thought may belong here. It opion + speculation and is not exhaustive or scripted. please co...