admin
Folks we're back with another no non-sense beginner's guide, this time for the hit MMO Final Fantasy 14. FF14 is easily one of the most stunning and visually appealing MMO's on the market.
But there's a major flaw with the game that causes it to be misunderstood. And it's that FF14's early game is pretty. darn. rough. MMORPG's are characteristically difficult to get into and will always have a high barrier of entry. You have a lot to learn which is both fun and exciting but can also be daunting.

However, FF14 in my opinion has one of the weakest new player experiences among the genre. It has pathing and navigation that's non-intuitive in some areas. The combat is slow and sluggish at low levels. Before you advance further into the game you don't have many spells or abilities to work with. And the MSQ is fantastic but it is a slog. If you have many friends who swear by the game but you just don't get it, you're not alone. Many people have checked out without getting past the early levels. But if you can make it past this the game. is. AWESOME. It's seriously one of the best MMO experiences on the market. So enough messing around let's get you started in the game!

Be mindful when picking a Server as they are grouped into Data Centers. There is no interaction between servers on different Data Centers so if you're looking to play with your friends make sure you're in the same grouping. The classes in FF14 are called Jobs and can be confusing at first, so let's break it down. These are your beginning jobs that you will pick from when you make a character. They each advance into their end-game form at level 30 and will get more abilities.

Here's what each job turns into once you get there. Marauder turns into Warrior. Gladiator to Paladin. Lancer to Dragoon. Pugilist to Monk. Rogue to Ninja. Archer to Bard (which is still an archer just with buffs). Thaumaturge to Black Mage. Arcanist is a dual job that splits into both Summoner and Scholar which share a level together. And Conjurer turns into White Mage. What's cool is one character can freely switch between all jobs in the game so you don't have to make any alt characters.

These jobs are unlocked later in the game and cannot be selected at character creation. Dark Knight, Astrologian, and Machinist are unlocked at and start at level 30 so you can switch to these jobs without starting over at level 1. Red Mage and Samurai start at level 50. Gunbreaker and Dancer are the latest additions and start at level 60. Lastly your Patron and Sign mean nothing so don't fret over that. And if you have any questions ask in-game as FF14 has easily the most welcoming and friendly communities on the internet.

The early game combat is slow and sluggish. A nearly 2.5s global cooldown and a lack of ability variety means you'll have to muscle through. But remember it gets much better later on so SURVIVE.

I wish I learned this immediately upon starting the game so let me skip you ahead. You'll see lots of ground area of effect attacks in your PVE encounters. You only have to avoid the ground indicator, NOT the effects you see afterward. This means if the ground indicator is gone you are free to move back into that space without fear of taking damage, even if there are visual effects playing.

The biggest hurdle you need to overcome is completing the Main Story Quest for the game. Each expansion has one and you will be gated from content until you finish them all. Luckily you only need to do this once per character, and doing so will give you enough XP to reach max level on one job. I thoroughly enjoyed the Main Storyline for the Heavensward and Shadowbringers expansions in particular. They're a treat.

Follow along at Drybear.co
Check out my live stream! http://www.twitch.tv/drybear 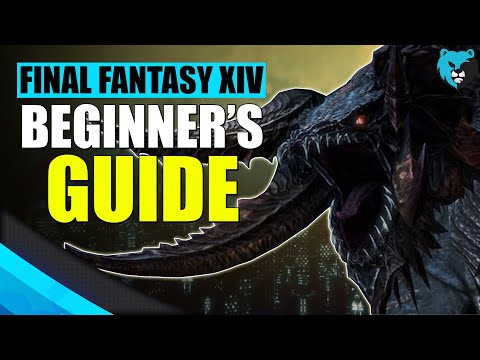 Folks we're back with another no non-sense beginner's guide, this time for the hit MMO Final Fantasy 14. FF14 is easily one of the most stunning and v...